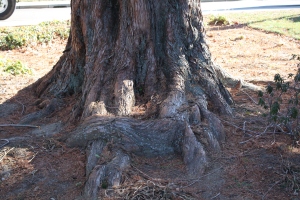 I’ve decided that I will continue to write about the Botanical Garden  until the New Year,  and then “turn inward” to the Conservatory in January. It’s hard to let go of the outside focus. Even though the days are almost as short as they will get, I want to be outside!

So: Here’s one of my favorite plants in the Garden. Metasequoia glyptostroboides, common name Dawn Redwood. When I give a tour of the Botanical Garden, I always point this one out and tell it’s story. The Metasequoia was  known only through fossils prior to 1944. At that time a small group of unidentified trees were found in China, which turned out to be living specimens of the Dawn Redwood. In 1948, after WW II, researchers at the Arnold Arboretum of Harvard University went to China  and brought back seeds. A few years later seedling trees were distributed to universities and arboreta around the United States. Our own Metasequoia comes from that original group of seedlings! 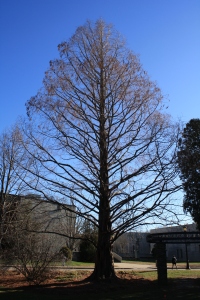 Sixty years or so later, the Dawn Redwood stands at about 100 (?) feet tall. It is a deciduous conifer, which means that it’s needles drop in the fall after turning a warm reddish brown. Tiny cones — about 1 inch long!– and deciduous branchlets also drop.  It grows fast, tolerates wet soil and air pollution, and very rarely is bothered by insects or disease.The Metasequoia thrives in temperate climates and is now widely planted  around the world as an ornamental. Unfortunately it is critically endangered in the wild. In Central China, where the Dawn Redwood originates,there are an estimated 5000 – 6000 trees left. Habitat loss and collection of cones and seedlings are the major causes of endangerment. However, because it is so widely cultivated, it is unlikely to become extinct. 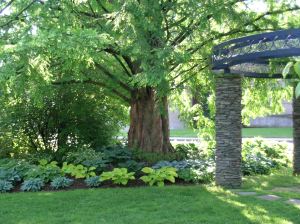 Standing at the corner of Upper College Road and East Alumni Ave, the Dawn Redwood marks the entrance to the Botanical Garden. I’ve taken many pictures of it in the past few years. The peeling reddish bark and feathery green needles appeal to me in all kinds of weather and light. The huge trunk is a great backdrop for informal portraits. Snow and ice highlight the fine texture of the branches.  I used a picture of the Metasequoia as the background for my computer desktop — my oldest son accused me with “Always the trees, never the family!” Not true, of course, but the Dawn Redwood remains one of my best- loved trees in the garden. 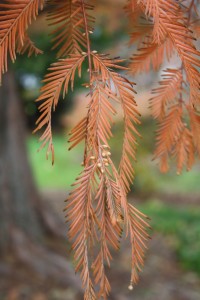