Clethra alnifolia is the scientific name for the plant I learned as Sweet Pepper Bush. It’s also called Summersweet. As you can figure from the common names, it smells sweet, and the bees love it. If I remember correctly from my beekeeping days, it makes a clear thin watery honey. Another name I have heard is Indian Soap, and it’s true that if you take a few flowers and rub them between your hands with water, they will create “soap suds”.

Clethra has long-lasting spikes of white flowers in August which attract butterflies as well as bees. The leaves are a dark glossy green, turning yellow in the fall. The flower spikes are followed by spikes of little seed pods which resemble peppercorns. Clethra is a native plant here in Rhode Island. It is abundant in moist, acidic soil in partial shade such as woodland edges, stream and pond banks, swampy areas, and wet meadow edges. Although it loves moisture, it is drought tolerant once established. It spreads by suckers and makes dense thickets, but doesn’t mind being pruned. A great feature of Clethra for the garden is that it blooms in the shade.

There are a number of cultivars which have been developed for landscapes, although to me the straight species is lovely in the garden. One is ‘Ruby Spice’ , which has pink flowers instead of white, and another is ‘Hummingbird’, which tops out at about three to four feet, instead of the twelve to fifteen feet that the species can attain. Both are here in the Botanical Gardens, along with the native Clethra alnifolia. 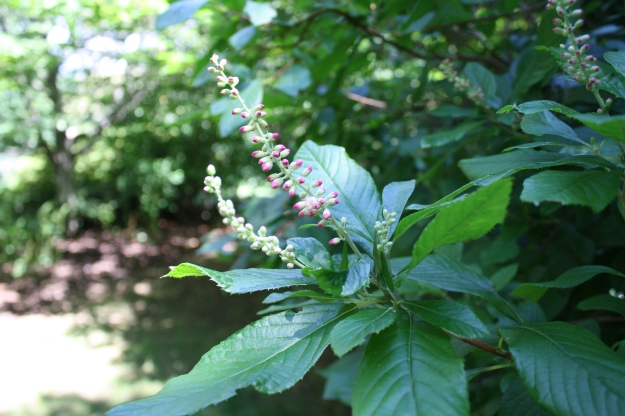 Walking by the Clethra last week, I got a nose full of the lovely sweet fragrance.  It is blooming earlier than usual, like many plants this year. For me, the smell of the Sweet Pepper Bush is forever linked to the start of school. It grows at the edge of our yard and I could always smell it as the boys waited for the bus on the first day of school ( tho it’s way too early for that bittersweet “back to school” feeling!) It is remarkable how strongly certain smells are linked with certain memories. Apparently the olfactory part of the brain is closely related to the memory and emotion part of the brain. One article I read said that people born before 1930 had more memories associated with smells from nature than people born later. (http://www.bbc.co.uk/science/humanbody/mind/articles/intelligenceandmemory/nostalgicsmells.shtml)

In addition to it’s many attributes — appealing flowers, fragrance, attraction to pollinators, shade tolerance — Clethra is also virtually disease and pest free. It is also salt tolerant, making it a good choice for coastal landscapes.